In the heart of Sri Lanka an immense column of rock rises dramatically out of the surrounding forest to a height of 200 metres. On its flat-topped summit lie the ruins of an ancient palace and fortress citadel complex built 1,500 years ago. This is Sigiriya – “Lion Rock” – probably the island’s most visited destination, and for good reason. The ruins, the gardens, the frescoes, the ingenious engineering and the spellbinding vistas all add up to an unforgettable experience.

A King’s playground and fortress

The palace and fortress were constructed during the reign of King Kasyapa, which only lasted from 477 to 495 A.D. He chose the site after assassinating his father and usurping the throne. The threat of attack by his vengeful brother, the rightful heir, may have prompted him to establish a new capital in a place with a 360-degree view!

The King had lavish gardens built throughout the complex – the water gardens, the terraced gardens and the boulder gardens. These landscaped gardens are among the oldest in the world and one of the most stunning aspects of the Sigiriya site. From the main entrance of the site you pass a series of symmetrical water gardens which extend to the foot of the rock. They feature curved tanks, bathing pools, little islands with pavilions that were used as dry season palaces, and landscaped borders. 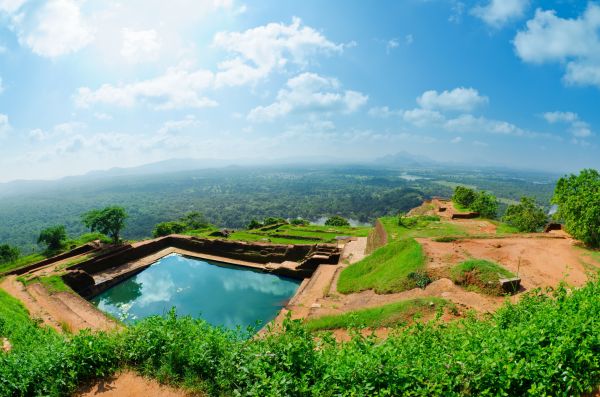 To reach the top of Sigiriya, and discover its amazing treasures along the way, you do have to climb a series of fairly steep staircases attached to the sheer walls. But it’s well worth the effort. About halfway up you’ll reach a long sheltered gallery in the sheer rock face. Here there are amazing frescoes of buxom, wasp-waisted women who are believed to represent either celestial nymphs of King Kasyapa’s wives. Protected from the sun in the sheltered gallery, the paintings remain in remarkably good condition, their colours still glowing. (Please note that photos are not allowed).

At the northern end of the rock you’ll come across two enormous lion claws – the only remains of what was once a gigantic brick lion that gives the rock its name. This was the start of the final ascent to the top, with a stairway that led between the lion’s paws and into its mouth. Today only the paws and the first few steps remain and the ascent is completed by metal staircases.

Another fascinating feature of the site is the Mirror Wall. Made of brick and covered in highly polished white plaster, the King could see himself while he walked alongside it. As time passed the wall became a graffiti board covered with messages from visitors, some dating back to the 8th Century A.D. The graffiti is of great interest to language scholars, and some translations are available at the Sigiriya Museum. Signs warn modern visitors not to add their own inscriptions.

At the summit, the palace complex is regarded as one of the best-preserved examples of urban planning. Today only the low foundations exist, but it’s hard not to be captivated by astonishing views from this lofty perch, extending for miles across verdant forest canopy.

The museum has a fine overview of the whole site explaining its cultural importance. There are interesting exhibits of tools and other artifacts found during the excavation, plus some wonderful black & white photographs of British archaeologist HCP Bell and his rather reluctant family exploring the site soon after its rediscovery.

The staircase ascent may seem daunting but as we said it is worth the effort. Elderly people and children manage the climb, which by the way is completely safe. Obviously it’s best to wear light and loose clothing, and carry something to drink to stay hydrated. You will be in a tropical country which is hot, and on a rock, which is double hot! Protect yourself from the sun and don’t carry heavy bags/rucksacks.