Visit Hue and The Perfume River

Hue (pronounced Hway) stands as a reminder of Vietnam’s imperial past. The seat of thirteen Nguyen dynasty emperors between 1802 and 1945, Hue was once Vietnam’s splendid Imperial City. Although much of Hue was tragically decimated during wars with the French and Americans, there is still much to see. Indeed, the monument-speckled former capital has a certain war-ravaged beauty. One can still imagine its former splendour, despite gaping holes in its silhouette. Hue is a UNESCO World Heritage Site, and the city’s gems are slowly being restored. Tourism keeps the city thriving, drawn by the ancient Citadel, mausoleums, pagodas and palaces.

Winding through Hue is Perfume River, with its many dragon boats, houseboats and long-tail vessels dredging for sand. In the autumn, flowers from orchards upriver from Hue fall into the water, giving the river its perfume-like aroma, hence its name. On its north bank within the Citadel is the walled Forbidden Purple City. Built under Emperor Gia Long in 1805, it covers 5km of Hue’s waterfront. It was almost entirely destroyed during the Tet Offensive in the Vietnam War but is now being slowly restored to its former glory. In its heyday, the Forbidden City housed members of the Imperial Family and the concubines and eunuchs who served them. Anyone else who dared to enter was executed.

The Mausoleum of Emperor Tu Doc

A boat trip on the river, puttering about in front of the citadel on a misty morning and watching the slow bustle of river life is a great way to experience Hue. Along the way, you will see Thien Mu Pagoda, the oldest pagoda in Hue which still functions as a monastery, perched on a hill above the river. It was constructed in 1601 with impressive Buddha statues, a seven-tiered monument, a bronze bell and a marble turtle dating back to 1715. The Mausoleum of Emperor Tu Doc is one of Hue’s most visited tombs, with its own lake and fine forest. Built in 1867 by thousands of labourers, this was once the second residence of Tu Doc, who was Emperor from 1848 to 1883. Rivalling this as Hue’s most impressive mausoleum is the Tomb of Khai Dinh, who was Emperor from 1916 until 1925. It is an extraordinary mix of Vietnamese and French colonial elements, with an entrance that’s guarded by a row of impressive stone elephants and imperial soldiers. A steep flight of steps, flanked by dragons, takes you to a surprisingly colourful tomb heavily decorated with tile mosaics. It is a sight to behold! 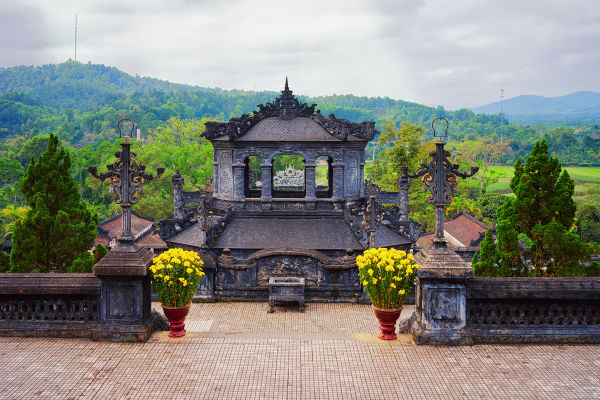 Away from the Perfume River, no visit to Hue is complete without taking in Dong Ba Market. Situated just north of Trang Tien Bridge (another attraction in itself) this is the largest market in Hue selling just about anything and everything. Whether or not you want to buy anything, it’s worth a visit just to immerse yourself in its sights, sounds and smells. And if you’re peckish, the street food on offer is fantastic. Not only is Hue one of the most photogenic cities in Vietnam, it also boasts some of the most amazing local cuisines.

Tours of Hue and The Perfume River