Perched on the banks of the Saigon River and still known as Saigon to its eight million inhabitants, Ho Chi Minh City (its official name) has changed from a war-torn city into a thriving metropolis up there with Singapore, Bangkok and Beijing. Into the hotchpotch of French colonial architecture, ancient pagodas and austere communist housing blocks have now been added all the trappings of economic boom – fine restaurants, shiny hotels, glitzy bars and luxury goods shops.

Saigon’s modern history really begins with the 1862 Treat of Saigon which declared it the capital of French Cochinchina. The city owes much of its form and character to the French colonists. By the 1930s Saigon had such an all-round Gallic air that Somerset Maugham described it as “like a little provincial town in the south of France, a blithe and smiling little place”. After independence from the French in the mid 1950s Saigon became the capital of the Republic of South Vietnam and soon found itself to be the American’s nerve centre in the Vietnam War. As the GI’s destination for “rest & recuperation”, Saigon was known as a “good-time” city in more ways than one, especially in the Cholon (“Chinatown”) district. Ironically, the end of the war brought the end of the good times and a difficult reunification period from the mid 70s. But with economic liberalisation in 1986 the city’s resurgence began and gathered momentum through the 1990s towards its prominence today.

A must-visit area is Cholon, the predominantly Chinese district of Saigon and in many ways a city quite apart from Saigon. A bustling commercial centre, Cholon is a fascinating maze of temples, restaurants, jade ornaments and medicine shops. Gone, however, are the brothels and opium dens of the colonial and American GI days. Ben Tanh Market is a riot of noise and colour, and a good place for lunch, though not as crowded as Bin Tay Market, which has similar goods but with a Chinese flavour. Quieter places to see in Cholon include the Chua Quan Am Temple, a working temple wafting with incense and gilded in gold and red paint, and Cha Tam, a small Catholic cathedral which offers a calming and cool place to take a break.

For some visitors, the Vietnam War is of prime interest and they will make for the War Remnants Museum, which remembers the conflict with displays of weapons and photos that are poignant, if somewhat grim. There are also many striking reminders of French Colonial rule, among them such memorable buildings as Notre Dame Cathedral and the grandiose Hotel de Ville. 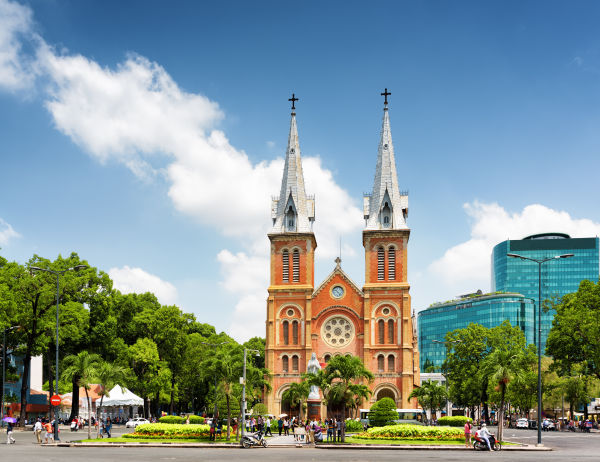 Anyone interested in art should visit the Ho Chi Minh City Museum of Fine Arts and its collection that includes the colonial period, combat arft and 90s abstract, all housed in an exquisite French colonial/Chinese mansion. Saigon’s contemporary art scene is evolving rapidly and the city’s list of galleries is growing.

Away from the previously mentioned markets, Saigon’s cosmopolitan atmosphere makes it less likely that shopowners will immediately be pushing you to buy, especially in more upmarket boutiques. Dong Khoi is Saigon’s premier shopping street, especially for clothing, jewellery, cameras and watches. It is also the location for hotels, cafes and bars, where you can enjoy all kinds of live music or just grab a street-side table and people-watch over a local beer. And to savour fantastic food for mere pennies, head to the open-air restaurants around Ben Tanh Market, or follow the locals to Quan An Ngon Restaurant, where cooking stations prepare unforgettable authentic Vietnamese dishes from around the country.

After the war ended in 1975 and the infamous “Fall of Saigon”, the city’s name was changed to honour the country’s greatest national leader. But it’s not only foreign visitors, especially those of a certain age, who struggle with the new name. You’ll notice that most Vietnamese people also still call it Saigon. To set the record straight, HCMC refers to the larger metropolitan area of some 19 districts, while “Saigon” is the name of the main commercial centre - Districts 1,3 and 5 – beyond which tourists rarely travel.

All clear now? Whichever way you call it, it’s still a great city.