As if Agra didn’t have more than its fair share of attention with the Taj Mahal, it also has up its sleeve the magnificent Red Fort, also known as Agra Fort. A mere 2km from the Taj along the Yamuna River, the high red sandstone ramparts dominate a bend in the river on a site first chosen by the Mughal Emperor Akbar in 1565.

How long did it take to build?

It took eight years to construct, with the help of some 4,000 labourers and craftsmen, initially as a military base in a structure variously described as crescent-shaped, ear-shaped or half-moon shaped. Take your pick. Successive generations of the Emperor developed the complex into a fortified palace, a city within a city, containing royal apartments, mosques, assembly halls and a dungeon. In short, the entire infrastructure of an imperial capital.  Akbar commissioned the walls and gates; his grandson Shah Jahan had most of the principal buildings erected, and Aurangzeb, the last great emperor, was responsible for the ramparts.

The walls have a circumference of about 2.5km and rise to 21 metres high, surrounded by a moat that was once infested with crocodiles to add another layer of security! Sadly many of the structures were destroyed over the years by Nadir Shah, the Marathas, the Jats and finally the British, who used the fort as a garrison. The fort still serves the military which explains why much of it is not accessible to tourists.

Of the fort’s several magnificent gates, only the Amar Singh gate provides entry for the public. It’s also known as the Lahore Gate after the city in modern-day Pakistan that it faces. Every year since Indian Independence Day and partition from Pakistan in 1947, the national flag has been raised and the Prime Minister has made a speech from the ramparts of the gate. This led in the 1980s to an increase in security against sniper attacks by blocking the tower windows.

Among the major attractions in the fort is Jahangir’s Palace (Jahangiri Mahal), built by Akbar as a private palace for his son Jahangir and the largest residence in the complex. It also served as Jahangir’s harem. 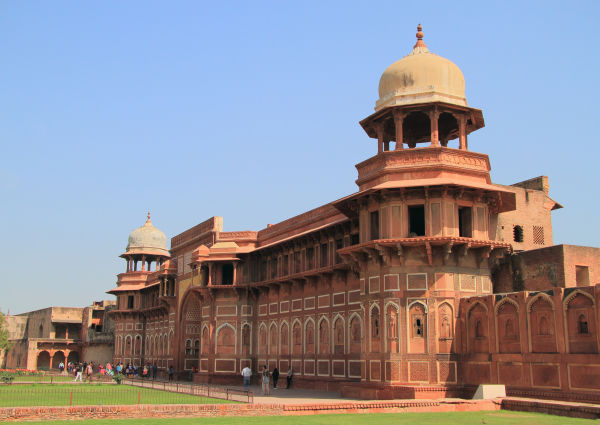 After Jahangir’s death in 1628, his son Shah Jahan assumed the throne and embarked on an ambitious programme of development, creating many of the fort’s most magnificent palaces immediately recognisable by the extensive use of his beloved white marble.

The Diwan-i-Am (Hall of Public Audience), is an arcaded hall where the emperor would listen to the complaints of his subjects, seated on the Peacock Throne.

The Mussaman Burj is a splendid white-marble octagonal tower with views towards the Taj Mahal. According to romantic legend, this is where Shah Jahan is said to have spent the last eight years of his life, imprisoned by his son Aurangzeb but still able to gaze out at his greatest monument, The Taj Mahal, which he had built for his wife.

At the northeastern end of the same courtyard, complex is the Sheesh Mahal (Palace of Mirrors), built in 1637 as a bath for the private palace and dressing room for the harem, its walls and ceilings inlaid with thousands of small mirrors.

As a tourist attraction, the Red Fort is not a poor relation to the Taj Mahal but a rich experience in its own right, and not to be missed. As one travel blogger recently noted:

“Immediately upon entering, the first thing I noticed was that Agra Fort is in astonishingly good condition for such an old structure. I totally expected to see ruins, not a fully functioning fort with rooms that still look much like they did in their prime. The details in the red sandstone completely surprised me as well. The entrance to Agra Fort (and the whole fort, really) is just exquisite.”