The capital of the Inca Empire and gateway to the Sacred Valley and Machu Picchu, Cusco (also spelt Cuzco) is one of South America’s undisputed highlights. With its beautiful natural setting, colourful festivals, amazing archaeological sites, gorgeous architecture and fantastic cuisine, Cusco has everything (for some people, a little too much of everything!). But despite being such a (justifiably) popular tourist destination, Cusco manages to retain its unique character and enduring appeal.

A bit of history

The Incas made Cusco (meaning “navel of the world”) the political, military and cultural centre of their empire in the 15th Century. By the time the Spanish Conquistadors arrived in Peru in 1532, Cusco was a thriving city. They were astonished by the city’s beauty, the quality of the stonemasonry and the abundance of precious metals. They knew it was essential to topple the city to take control of the region, which they ultimately achieved after an epic battle at Sacsayhuaman. As was their habit, they plundered and destroyed many Inca buildings; but often they found the structures so well engineered that they built upon the very foundations of Inca Cusco. The result is a city with layers of history.

A lot of sights

The focal point of Cusco is the Plaza de Armas, lined by arcades and carved wooden balconies, its northern and western sides filled with shops and restaurants. At the northeastern edge is the imposing Cathedral (La Catedral). Built in the shape of a Latin cross, construction began in 1560. Among the many highlights are the intricately carved pulpit, beautiful cedar wood seats and Neoclassical high altar, not to mention numerous fine paintings. Many of the city’s architectural treasures were so masterfully built that they are still in great shape today. A prime example is the Qurikancha Temple (Temple of the Sun God), one of the most important Inca temples one filled with gold walls, statues and altars. 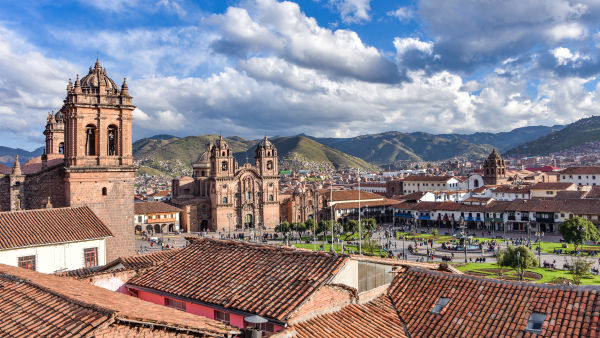 Overlooking the whole of Cusco and a must on any itinerary is the seemingly impregnable fortress of Sacsayhuaman. Now designated a UNESCO World Heritage Site, its oldest sections are believed to have been built by the Kilke people, a culture predating the Incas. When the Spanish conquered, they removed many of the perfectly cut stones from Sacsayhuaman to build the cathedral and government buildings in Cusco.

A visit to the site of the Kenco (or Qenko) temple and caves is fascinating, if also a little forbidding given its probable role as a place of ceremonial sacrifice. The name means ‘zigzag’ in Quechua language, referring to the zigzag channels carved into the top of the rock, believed to have been used for pouring sacrificial chichi – llama blood – by priests during ceremonies and death rituals. For many visitors, a feeling of mystery permeates the site.

If your itinerary allows you time to wander and explore Cusco at your own leisure, nearly every site you’ll want to visit is within walking distance of the main Plaza de Armas, and you can easily cover the main features of each quarter in half a day. However, be warned, Cusco sits at an altitude of 3,400 metres (11,000 ft) which means the air is very thin. Exploring on foot (the best way) can involve steep steps, leaving even the fittest of travellers gasping for breath. Know your own limitations and don’t overstretch yourself.

On the other hand, you may just want to enjoy a meal and a drink at one of Cusco’s innumerable restaurants and bars offering an extraordinary range of wonderful cuisine which is internationally renowned.