For visitors to Peru, Lima is on the way to everywhere and often overlooked in their hurry to get there. But with its gloriously messy history and equally glorious architecture, it deserves some attention. It is Peru’s largest city and its capital, founded in 1535 by Francisco Pizarro as the headquarters of the Spanish Conquistadors. It grew and prospered… until an earthquake in 1746 destroyed all but 20 buildings. But it was elaborately rebuilt, creating the legacy we see today of wide streets, huge plazas and old houses with ornate balconies.

Through the 19th Century Lima continued to prosper, but the good times didn’t last. The second half of the 20th Century brought a host of political and economic problems, creating shanty towns of poor migrants. By the early 1990s Lima was at a low point in its history. And yet… its fortunes are on the rise again. The city now has a cosmopolitan atmosphere and districts such as Miraflores and Barranco have become cultural centres filled with excellent bars, restaurants and fashionable shops. Meanwhile historic Central Lima is being sensitively restored and its colonial splendour remains a sight to behold.

So much to see

The crowning glory of Lima’s colonial centre is the Plaza Mayor, now a UNESCO World Heritage Site. The north side is dominated by the magnificent Government Palace, the home of Peru’s President. Over on the east side is the Cathedral, completed in 1622, destroyed in the earthquake of1746 and completely rebuilt by 1755! The supposed remains of Francisco Pizarro lie in a small chapel. One of Lima’s few large buildings to survive the earthquake was the Church and Convent of San Francisco, a spectacular building from the colonial era. The bright yellow Franciscan centre is most famous for its catacombs, whereas many as 75,000 bodies were interred before Lima’s main cemetery was built. The monastery also contains a remarkable library containing many thousands of antique texts, some dating back to the Spanish Conquest and the early years of Lima’s existence. Lima’s oldest religious complex is the San Domingo Convent, whilst a symbol of Lima’s recent rejuvenation is the Plaza San Martin, built in the early 20th Century, it has come to life in recent years as the city has set about restoring its parks and giving the surrounding beaux-arts architecture some Tender Loving Care. 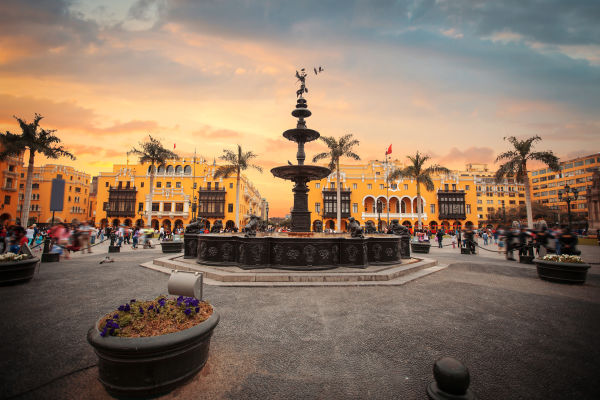 When locals and tourists alike want to escape the grit and grime of the city centre, they generally head for the modern leafy suburbs of Miraflores and Barranco. Arty markets and galleries are relaxed places to pick up crafts, textiles, ceramics and jewellery, while you’re spoilt for choice when it comes to designer boutiques and department stores, good restaurants, street cafes, bars and clubs.

Famous for its cuisine

When it comes to cuisine, celebrity chefs such as Gaston Acurio Jaramillo and Pedro Miguel Schiaffino have put Lima on the culinary map. A speciality is ceviche, seafood marinated in lime juice. There are modern twists on Amazonian food, or you could try noodles and wontons fresh from the wok in Chinatown’s lively chifa restaurants, or maybe crisp wood-fired pizza in one of Miraflores’s Italian bistros.

Thirty years ago it would have been hard to find anything positive to say about Lima and equally hard to find many people wanting to visit. How times have changed.