Named as a UNESCO World Heritage Site in 1983 and declared one of the “New Seven Wonders of the World”, the lost city of Machu Picchu is, in many people’s eyes, one of the most thrilling and awe-inspiring sights in the world. Not surprisingly, it attracts visitors in huge numbers from around the world. But don’t let that put you off, because tourism to the site is now well organised and regulated, and the place is large enough for its tranquillity to remain untrammeled. All those photographs you will have seen of Machu Picchu cannot begin to do it justice.

Like the clouds that envelop the peaks and terraces before being burned off by the rays of the morning sun, a shroud of mystery surrounds the origins of Machu Picchu. Was it a citadel? An agricultural centre? An astronomical observatory? A ceremonial city or a sacred retreat for the Inca emperor? Or a combination of all of these? The theories and debates have been bouncing around ever since its rediscovery in 1911 by the US explorer Hiram Bingham. He thought he’d found the lost city of Vilcabamba, the site of the Inca’s last refuge from the Spanish Conquistadors. But this assertion was thrown into doubt by another American survey in the 1940s. The fact is we’ll probably never know for certain exactly why Machu Picchu was built. Adding to the mystery, this city of amazing architecture and fine masonry was constructed, inhabited and deliberately abandoned all in less than a century. What we do know for certain is that the Incas hid Machu Picchu so well the Spanish Conquistadors never found it, and so never looted it. That’s why so many architectural features remain in such good condition. 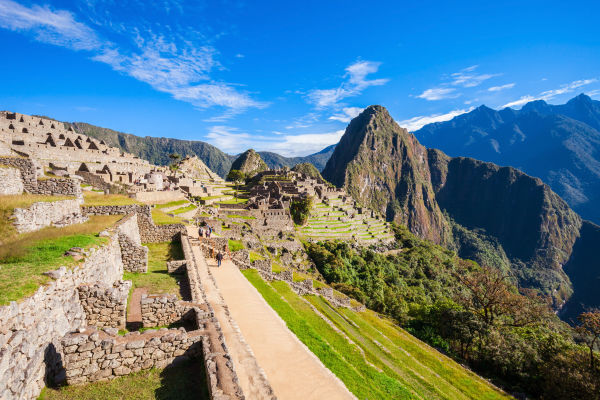 A stunning landscape with breathtaking views

Though more than 1,000m lower than Cusco, Machu Picchu actually feels much higher. The 12 acres of terraces, gardens, staircases, temples and aqueducts sprawl along a verdant ridge above the Rio Urubamba and seem to be carved directly out of the hillside. It is one of the world’s greatest examples of landscape art. More than a hundred flights of steep stone steps interconnect its palaces, temples, storehouses and terraces. Wherever you stand in the ruins, you can see spectacular terraces slicing across ridiculously steep cliffs, transforming mountains into suspended gardens. The outstanding views take in not just the valley below in both directions, but also beyond to the snowy peaks around Salcantay. You’re also very likely to see numerous Llamas roaming the mountainside, as much at home here as they are in their high altitude habitats throughout the Andes. This delightful animal has a central place in Inca folklore, not to mention a prominent position in countless tourist photographs!

To Machu Pichu by Choo-Choo!

With Mercury, your journey to Machu Picchu will be by the wonderfully scenic railway route. Our tour will take you around the tombs, temples and palaces of this 550-year old city. You will then descend back to the railway station town of Aguas Calientes for lunch before the return journey by train.