In 1728 the Maharajah Sawai Jai Singh II decided to move his capital from the Amber Fort to a dry lake in the valley below. Completed in just eight years, Jaipur was the first city in India to be built with rigorous town planning according to the principles of “Shilpa Shastra”, an ancient Indian treatise on architecture. The “Pink City”, as it’s also known, is protected by high walls, with wide, straight avenues that divide it into nine sectors.

If you think all of this makes Jaipur sound like a serene and orderly place, then think again. The city’s streets are certainly colourful but also chaotic. Slow-moving camels are dodged by careering buses. Rickshaws frustrate impatient motorcyclists. Horns blare. Engines roar. People shout. Yet, in the midst of this modern mayhem, there are majestic reminders of Jaipur’s splendid history – oases of relative calm transporting you into a different world.

A prime example right in the centre of the Old City is the impressive City Palace, a complex of courtyards, gardens and buildings which is still the home of the former royal family. Highlights include the Armoury, a collection of exquisitely crafted yet truly vicious looking daggers and swords. The Diwan-i-Am (Hall of Public Audience) houses an extraordinary collection of miniature paintings, carpets, manuscripts and photographs.

Next to the City Palace is Jantar Mantar, an observatory created by the astronomy-obsessed Jai Singh II and a fitting legacy of his genius and passion. There are 18 amazing instruments, many of his own invention, which resemble a modern sculpture exhibition or sci-fi setting. Some are still used to forecast how hot the summer will be or when the monsoon season will arrive. 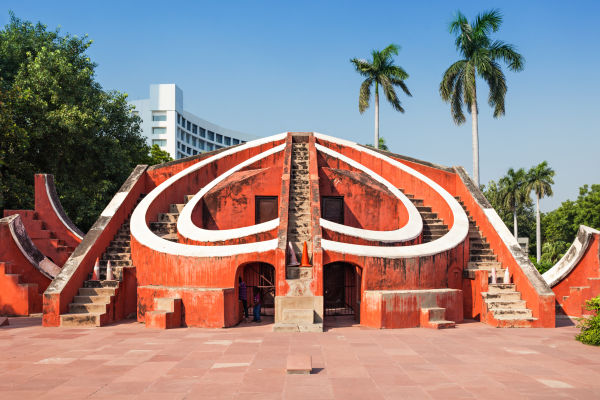 Another extraordinary sight, and perhaps Jaipur’s most distinctive landmark, is the Hawa Mahal. With its hundreds of tiny windows on a façade rising five storeys, it’s like a huge pink-painted honeycombed hive. It was built in 1799 by Maharaja Sawai Pratap Singh, reputedly to enable the ladies of the royal household to watch the streets below without being seen.

Of course, you wouldn’t want to miss out on Jaipur’s star attraction, the Amber Fort (for more details see our separate entry for Amber Fort). Technically more of a palace than a fort, located just 11km from Jaipur, this was the former capital of the Kachchwaha Rajputs until 1728. Spanning over four huge courtyards, you will travel to the centre of the fort by jeep, passing snake charmers, harems of the Maharajah and the Palace of Mirrors along the way – all making for a truly unforgettable experience.

Why “The Pink City”?

The colour of Jaipur is actually terracotta, but let’s not split hairs. Theories abound about why Jai Singh II decided to plaster the walls, buildings and temples in this colour. Was it because of his devotion to Lord Shiva, whose favourite colour this was? Or was it simply to reduce the sun’s glare? Others believe Singh wanted to imitate the forts and palaces of his Mughal cronies, or maybe it’s that pink is the traditional colour of hospitality. Whichever notion you prefer, the fact is that the city is painted once every ten years by the Municipal Corporation.