Delhi is a microcosm of India’s past, present and future. Here are the extremes that make India so compelling. A city that encompasses Mughal glory, European grandeur, Punjabi opulence, and the futuristic high-rises and malls of the new satellite city of Gurgaon. Vulgar prosperity and extreme poverty are close neighbours yet a million miles apart. It is polluted and overpopulated, which is why it is not a place to linger for long. But it is also packed with spellbinding sights, extraordinary architecture and breathtaking monuments. The contrast between the rambling Old Delhi and well planned New Delhi is immense, and it’s rewarding to spend time exploring both.

One of the Old City’s greatest treasures and the largest mosque in India, Jama Masjid can hold an incredible 25,000 devotees. Completed in 1656, the mosque took six years and 25,000 labourers to build and was Sha Jahan’s final architectural triumph. A strenuous climb to the top of its southern tower will reward you with a stunning view across the rooftops of Delhi. You can see how it is a direct line with Connaught Place and Parliament House – the deliberate work of architect Edwin Lutyens to incorporate the mosque into his design of New Delhi. 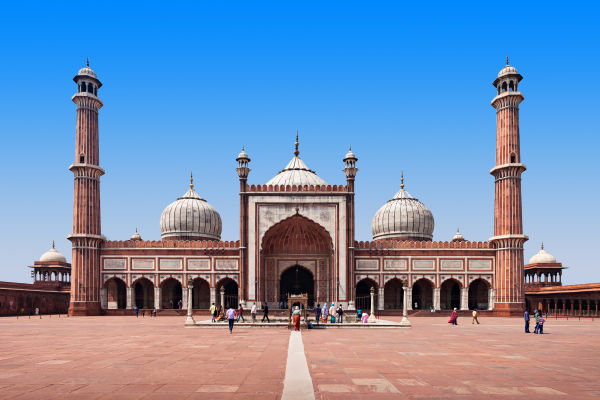 Old Delhi’s Red Fort (Lal Qila), not to be confused with the Red Fort at Agra, was founded by Shah Jahan and built between 1638 and 1648. For your (morbid) interest, it had the decapitated bodies of prisoners built into the foundations for luck! Not that it did Shah Jahan much good, because before he was able to reside there full time he was imprisoned back at Agra Fort… by his own disloyal son Aurangzeb. The last Mughal emperor Bahadur Shah Zafar was flushed from the Red Fort in 1857 and exiled to Burma for his role in the First War of Independence. The British did the fort no favours by replacing some of its fine buildings with ugly barrack blocks for the colonial army.

Much better preserved, and in many visitors’ opinion the best of Delhi’s ancient ruins, is the Qutab Minar complex to the south. The Qutab Minar, the sandstone ‘Victory Tower’ which was built at the end of the 12th Century, is the tallest brick minaret in the world and an amazing example of early Indo-Islamic architecture. It is remarkably well preserved, and photographs don’t really do the tower justice, either in scale or in the detail of its carving. It’s called Victory Tower because it was built to set in stone the triumph of Muslim rule, using the very finest craftsmen and artisan.

When you’ve had your fill of historic buildings and fancy a bit of shopping and maybe some street food, head for Chandni Chowk, the main street of Old Delhi. It’s rather chaotic and congested, with cars, rickshaws, pedestrians and animals all jostling for space, but it is captivating. This is one of the oldest and busiest markets in India. You probably won’t want to hang around too long, but once experienced, never forgotten.

It’s Delhi in a nutshell.