Shimla straddles an eight-mile long ridge, its buildings clinging to the green hillsides. The British ruling classes began coming here in the 1820s as a refuge from the summer heat. By 1864 Shimla, known as the Queen of Hills, was the British Raj’s official summer capital. At nearly 7,000ft above sea level, its climate was ideal and the surrounding pine forests provided copious building materials.

What was once a tiny farming hamlet became a place of eccentric grandeur, where croquet on the lawns, rounds of golf, games of cricket, a day at the races and afternoon tea on the terrace all helped to pass the time agreeably. They even skated on an ice-rick that still survives. Of course they couldn’t bear to be without their amateur theatricals which took place at the Gaiety Theatre, where, according to local gossip, Rudyard Kipling was booed off stage!

Shimla in the 19th Century

Shimla in the late 19th Century became a microcosm of British Society, with the comforts and amenities of a traditional British town, including schools, churches, lodges, a post office, and from 1903, a railway station as the terminus for the Toy Train (see separate article). The architecture is a whimsical mix of Mock Tudor and Elizabethan with Gothic twiddles.

Shimla’s main promenade is The Mall, a pedestrian avenue stretching across the length of the city. Along this stretch crumbling remnants of the British Raj abound, including the Telegraph Office and the adjacent Railway Booking Office. Above the Mall is The Ridge, a wide-open esplanade watched over by a statue of Gandhi and one of Shimla’s most imposing structures, the Gothic Christ Church. 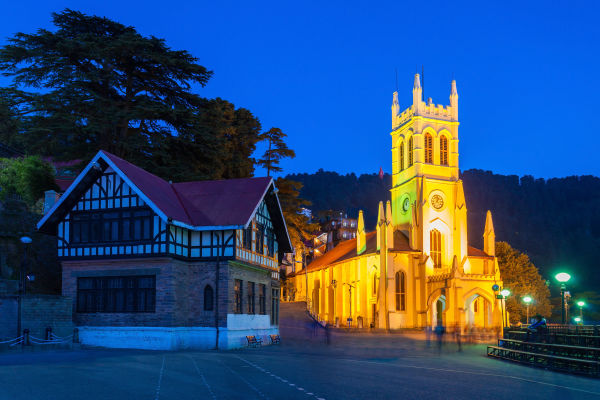 Opened in 1846, this is one of the oldest surviving churches in northern India, containing some interesting Raj-era memorabilia and some fine Victorian stained glass. But probably the single greatest architectural testament to the British Raj is the Viceregal Lodge (Rashtrapati Niwas), a vast six-storey pile built in the style of a Scottish baronial mansion (or as some have commented, Harry Potter’s Hogwarts!). The official summer residence of the British Viceroys was completed in the summer of 1888. For six months of every year until independence in 1947, the entire Indian subcontinent was rules from here. Since 1964 The Lodge has been the home of the Indian Institute of Advanced Studies, but some parts are open to the public.

Only 12 miles from Shimla and definitely worth a visit is the picturesque hill station of Kufri. Founded in 1819 by the British, this charming town is surrounded by dense forest and snow-capped mountains, offering staggering viewpoints of the magnificent countryside and vast mountains beyond. The nearby Himalayan Nature Park is home to over 180 varieties of fauna, and in February the town also hosts an annual winter sports festival including skiing and tobogganing. Kufri has the oldest skiing slopes in Himachal Pradesh.

Spiritual India with Agra and the Taj Mahal Extension