Whilst the Angkor Archaeological Park tends to be referred to as Angkor Wat, it is the Angkor Thom complex that often inspires the most awestruck commentary. As one description accurately concludes, “the sum of the parts is greater than the whole”.

Once the richest city in Southeat Asia

This was a city in its own right, the last great capital of the Khmer empire built by King Jayavarman VII in the late 12th century. Covering an area over 10 sq km, it was inhabited by more than 1 million people, and it was the richest city in Southeast Asia.

Incredibly, a description of Angkor Thom written in 1296 by a Chinese envoy named Zhou Daguan could have been penned today:

“The wall of the city is some five miles in circumference. It has five gates each with double portals… Outside the wall stretches a great moat, across which access to the city is given by massive causeways. Flanking the causeways on each side are fifty-four divinities resembling war-lords in stone, huge and terrifying…”

All this can still be seen by the 21st-century visitor.

Temple of Bayon and Baphuon

At Angkor Thom’s geographic centre stands the mind-boggling state temple of Bayon. This ornate Buddhist structure is a three-tiered pyramid temple that rises into 54 small towers, topped with huge all-seeing enigmatically smiling faces. This is why you will hear Bayon referred to as “the temple of the faces”. These are simply stunning, and worth the visit alone. But what do the faces mean? Who do they represent? One theory is that the sculptures represented King Jayavarman VII as an all-seeing God-King (and there is little doubt as to his creative genius and inflated ego). Another suggestion is that the 54 towers represented the 54 provinces of the realm, with the King surveying all before him. We’ll probably never know, which seems only appropriate for a monument whose signature is an enigmatic smiling face. But one thing is for certain; we’ll never stop trying to figure it out.

Just to the north of Bayon is the slightly older Baphuon, built in the mid-11th century by King Udayadityavarman. Currently, it has an unwanted reputation as the “world’s largest jigsaw”, on account of the fact that the Khmer Rouge destroyed archaeologists’ meticulous records leaving some 300,000 stones to be somehow put back in the right order. After much painstaking research, a partial restoration has been completed and an elevated walkway offers a fascinating view of the site. 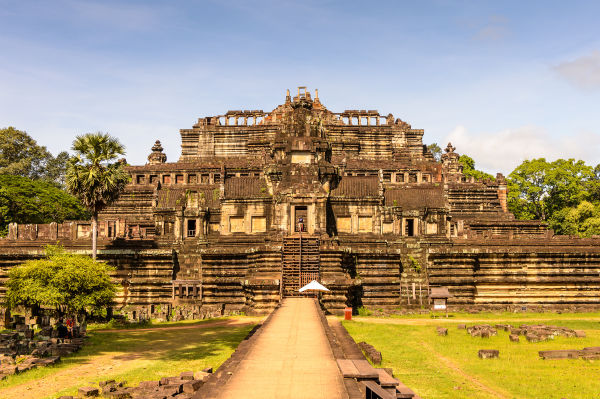 Finally, you should allow time to see the Elephant Terrace and the Terrace of the Leper King. The ornamental Elephant Terrace once formed the foundation of a gilded wooden palace that has long since disappeared, but stone-carved elephants and giant eagle-people (garuda) adorn the 2 metre wall of the terrace. At the north end is the Terrace of the Leper King, named after a stone statue found here. Precisely who the Leper King was and how he got his name remains unresolved and, as ever, subject to all manner of speculation.

Highlights of Cambodia with Saigon and the Mekong Extension