Siem Reap has long been regarded as the natural base for a visit to the temples of Angkor. So, as global tourism has boomed in the last twenty years, bringing ever greater numbers to the Angkor complex, so Siem Reap has blossomed.

The blossoming of Siem Reap...

What was once a quiet, dusty town of rutted roads and dark nights is now a 24-hour city with five-star hotels and all the trappings of sophisticated shopping, dining and nightlife. And yet, and yet, it has somehow managed to retain much of its original small-town charm. When you return from Angkor possibly feeling slightly maxed out on temples, you could spend your evening strolling along the Siem Reap River before dining at an outdoor table in the old French Quarter or sinking a beer in the more boisterous Pub Street. The Old Market area is a big draw, with a bewildering array of shops, cafes, galleries and souvenir stalls. There’s a vibrant creative and performing arts scene too, including Phare the Cambodian Circus – Cambodia’s answer to Cirque du Soleil which many now consider unmissable when staying in Siem Reap.

Staying on the theme of performing art, in Siem Reap you will have the chance to see an Aspara Dance, as depicted in bas-relief on the temple walls at Angkor Wat. This extraordinary art form, which was taught only at the royal court, was very close to extinction after the ravages of the Khmer Rouge. These days the dancers are trained at the Royal university of Fine Arts in Phnom Penh, starting as young as 7 and training for up to 12 years to reach artistic maturity. Wearing glittering silk tunics, sequin tops and elaborate headdresses, the dancers perform from a repertoire of 1,500 intricate positions with incredible deftness, flexibility and deliberation. Catch it if you can.

A highly recommended is a trip to explore the fascinating floating villages on the nearby Tonle Sap Lake. The largest freshwater lake in Southeast Asia, it hosts one of the world’s most vibrant ecosystems. Many different species of wildlife in massive numbers helped to sustain the ancient Khmer civilisation and continue to supply Siem Reap restaurants. Fishing is the primary occupation and it is fascinating to observe the way of life in these floating villages. Depending on whether it’s the wet or dry season, the massive lake is as much as 250 km in length and 100 km across, making it seem more like an inland ocean. 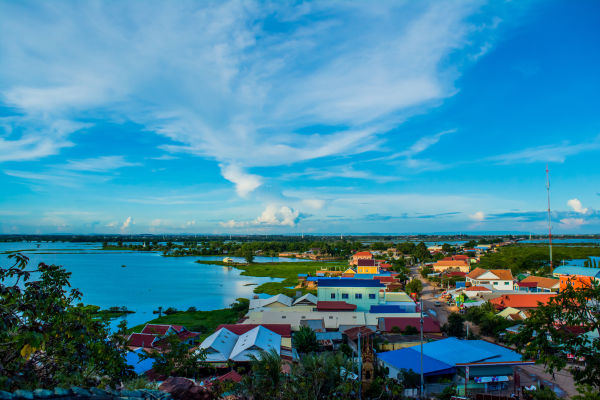 From rural charm to urban chic

Visiting Siem Reap in 1935, Geoffrey Gorer described it as a “charming little village, hardly touched by European influence, built along a winding river; the native houses are insignificant little structures in wood, hidden behind the vegetation that grows so lushly along the riverbanks”.

Hard to imagine as you roam the streets with their hip hotels, exotic eateries, sumptuous spas and boisterous bars… Siem Reap has truly reinvented itself as the epicentre of chic Cambodia.