Travelling in Cambodia takes you back through thousands of years of history. By contrast, the coastal town of Sihanoukville didn’t exist until a mere half-century ago. But after all that cultural and physical exercise, this is the perfect place for some relaxing R&R.

“Snooky” as it is known to many foreign visitors - sits on a peninsula jutting into the Gulf of Thailand, its coastline scalloped with gently shelving, tree-fringed white sand beaches and little islands dotted around the sea. It was created in the early 1960s as a deep-sea port for the newly independent Cambodia by a French-Cambodian consortium. Named after the ruling prince of Cambodia, the boomtown and its beaches quickly became a destination for what was then known as “Jetsetters”. The Independence Hotel, first opened in 1963 with an interior designed by Prince Sihanouk himself, came to symbolise this new place of modernism and opulence. Locals claim it played host to Jacqui Kennedy on her whirlwind tour of Cambodia in 1967.

But in the 1970s everyone left the playground as Cambodia descended into civil war and then into the murderous hands of Pol Pot’s Khmer Rouge, who used the Independence Hotel for target practice and provoked the US Air Force into bombing the port. Even after Pol Pot’s regime was gone, the town and the beaches stayed empty until a resurgence began in the 1990s. Sihanoukville has, quite literally, picked up the pieces and any traces of war are now hard to find. After decades of hosting only ghosts, the Independence Hotel has been returned to its former glory, and more bars, restaurants and hotels seem to open with each passing month.

We won’t pretend the town itself is the prettiest place on earth. Its primary attractions are its beaches and water sports, bordered as it is on three sides by tropical beaches and islands. Whether you want to dabble in scuba diving, snorkelling, boating or island hopping – or simply lie on the beach with a good book – all options are open. And when the sun goes down, Snooky has pretty much everything to offer, depending on your taste. Tuk-tuks are in plentiful supply, as are bikes, mopeds and motorcycles to hire if you want to explore a little further afield. A short cycle or moto-ride along the coast in either direction will take you to quieter beaches. 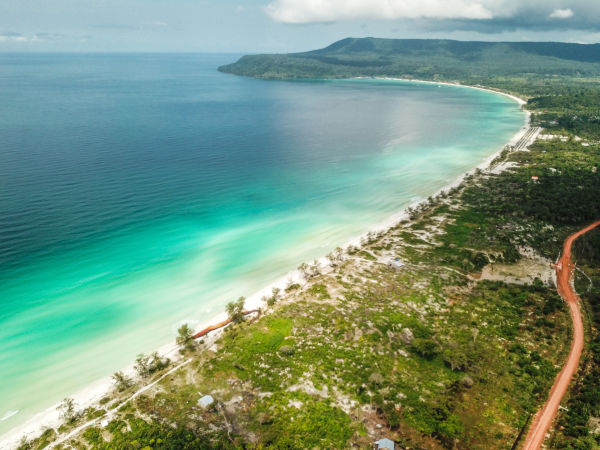 Ream National Park and its beauty...

Sihanoukville is also the base for another area of outstanding natural beauty, Ream National Park. It was established in 1993, encompassing a large portion of the coastal area including sandy beaches, mangrove forests, offshore coral reefs, the Prek Tuk Sap Estuary, and two islands, Koh Thmei and Koh Seh. Here live elusive creatures such as macaques, sun bears, dolphins, mouse deer, pangolin and all manner of bird species. A riverboat trip up the Prek Tuk River through the jungle and mangroves on to the sea is the best for wildlife watching and most tours are less than half a day.

On the other hand, of course, you could choose to stay by the pool at your very comfortable hotel with a cold beer and good company.