When you visit Angor Wat, you are quite literally entering a parallel universe. This astonishing, vast and mysterious complex of soaring towers and exquisite sculptures is believed to represent the spatial universe in miniature. The central tower is the earthly representation of Mt Meru – the Mt Olympus of Hindu faith. It is surrounded by smaller peaks, which in turn are bounded by continents (the lower courtyards) and the oceans (the moat).

Lost in the jungle for 600 years

True or not, to many people the ruins of the ancient city of Angkor are unparalleled as a marvel of the world. Built under the reign of Suryavarman II in the 12th Century, this temple, along with Bayon and Baphuon, is the very pinnacle of Khmer architecture. Angkor was the seat of the Khmer kings and one of the largest capitals in Southeast Asia. From the 15th century onwards it was abandoned, and, incredibly, its location was unknown to the outside world until 1861, when it was discovered by French naturalist Henri Mouhot. Although it was lost in the jungle for 600 years, the Khmers knew of its existence and whereabouts but preferred to leave its slumbering spirits undisturbed. Archaeological expertise and more recently radar technology have since revealed that Angkor Wat was the epicentre of a sprawling city at least as big as Berlin.

The logistics of its construction are mind-boggling. Sandstone blocks were quarried from the holy mountain of Phnom Kulen more than 30 miles away and floated down the Siem Reap River on rafts. It involved some 300,000 workers and 6000 elephants. The highest tower soars to 669 ft. The whole complex is surrounded by a rectangular moat over 3 miles in length and nearly 200 metres wide. The temple has more than 3,000 asparas (heavenly nymphs) carved into its walls, each of them unique. Stretching around the outside of the central temple complex is an 800m-long series of intricate and astonishing bas-relief carvings depicting historical events and mythical stories. 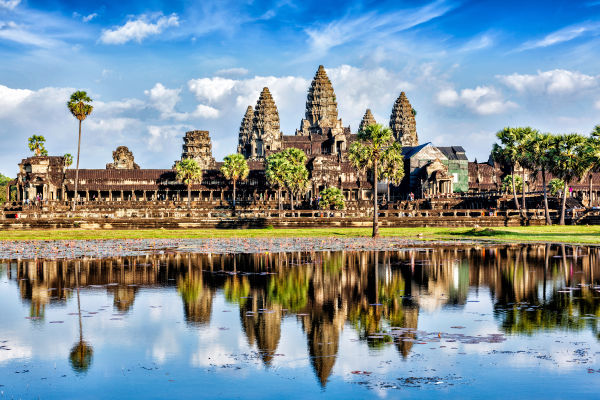 The approach to the temple takes you along a causeway across the moat and into the compound, then into a large grassy courtyard housing the main temple. From there you’ll enter an astounding area of statuary, galleries and bas-reliefs which depict the mythical “Churning of the Ocean of Milk” – a legend of Hindu gods stirring vast oceans to extract the elixir of immortality. An ascending progression of three levels leads to the inner sanctum. Unless you suffer from vertigo, the short trip up some tricky steps to the top is well worth it, with awe-inspiring views (though occasionally it is closed off).

So what led to the demise and abandonment of the huge city that was once Angkor? One theory is that, like many modern cities today, it simply overreached itself. Its eventual overpopulation caused unsustainable deforestation, the erosion of topsoil and overworking of the irrigation system. Such is the understandable popularity of the site in the 21st century, it is to be hoped that enlightened practices in sustainable tourism will be applied to avoid history repeating itself.