Too many attractions to chose from

You could spend weeks, if not months or even years, in Beijing and still not do it justice. No other city in China, and few in the world, offers so many must-see attractions. Beijing is as compelling as it is complex; a capital of exhilarating extremes, a crucible of China’s headlong progress and historical past. There are no less than six Unesco World Heritage Sites in Beijing – only one fewer than in the whole of Egypt! At its heart, quite literally, lies the awesome space of Tiananmen Square, the largest city square in the world. Here too lies the embalmed body of Mao Tse Tung, whose giant portrait also makes the square a kind of living museum of Chinese Communism. Standing in the square, visitors can observe the majestic gates to the mysterious Forbidden City – off limits to the public for 500 years but now an enthralling insight into China’s imperial heritage. (For further reading on Tiananmen Square and the Forbidden City, both of which are integral features of our tours, please see our separate articles on this website).

So when you only have a limited time to spend in this incredible city, there are some other sites that really are essential viewing. The Summer Palace is definitely one of them. This expanse of elaborate pavilions, bridges, walkways and gardens, scattered along the shores of the immense man-made Kumming Lake, was a summer playground for emperors and empresses constructed between 1749 and 1764. It’s an eclectic mix of Chinese and Western styles, and structures built purely for imperial enjoyment and distraction. The giant Marble Boat, for example, sits permanently on the shores of the lake – although, as one novelist observes, it is “neither marble nor a boat”. 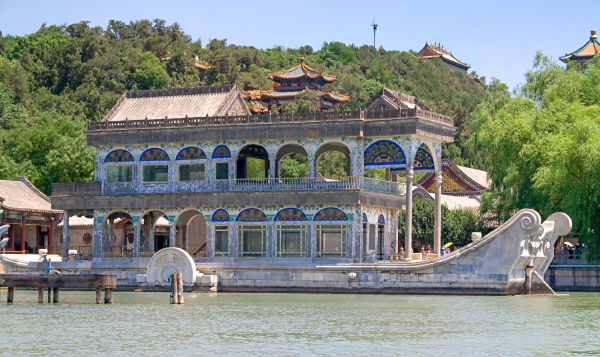 Then, there is the Long Corridor, a covered wooden promenade stretching nearly half a mile and adorned with more than 14,000 paintings.

The Temple of Heaven

A visit to the Temple of Heaven, the most striking of Beijing’s temples, has been described as a park outing, a cultural experience and physics lesson all rolled into one. Set in a large, tranquil park south of Tiananmen Square and widely regarded as the pinnacle of Ming design, its architectural unity, beauty and ingenuity are quite breathtaking. Highlights include the Altar of Heaven and the Imperial Vault of Heaven, with the so-called Echo Wall, where whispered words transmit from end to end. Topping it all is the Hall of Prayer for Good Harvests, probably the most stunning building in Beijing. Made entirely of wood without the aid of a single nail, this circular hall, with its triple-eaved cylindrical blue-tiled roof, is perhaps the most recognisable emblem of Chinese imperial architecture outside of the Forbidden City.

The wonders of Beijing architecture encompass not just the ancient but also the modern. Leading architects and artists from around the world vie for the chance to put their stamp on this global powerhouse. Perhaps the best known, because it was the centre of worldwide attention for two whole weeks, is the 2008 Olympic Stadium – known for obvious reasons as the Bird’s Nest. Even if you saw it on TV, you’ll still be amazed when you see it in the flesh – a bold statement structure designed by Swiss architects in collaboration with the controversial Beijing-born artist Ai Wei Wei.

The Great Wall of China

Finally, no visit to Beijing is complete without an excursion to the Great Wall of China. First, let’s deal with what it is not. It is not a structure that can be seen from space. And it is not a single continuous structure. Nevertheless, what it is still boggles the mind; a string of fortifications made of stone, brick, earth, and wood hugging the crests of mountains and stretching for thousands of miles across northern China.

Our visit to the wall avoids the overcrowded section of Ba Da Ling and takes you instead to the relatively peaceful stretch at Juyong Guan. Guarding one of the two crucial passes to Beijing and the vast North China Plain, this was the site of pitched battles involving Jurchen, Mongol, and more recently, Japanese invaders.

On our tour we have included a cable car trip to a viewing point, offering unforgettable views while avoiding arduous steps.