Kyoto and Tokyo make an anagram of each other, but that’s pretty much all they have in common. Whilst Tokyo, on the surface at least, is all high-speed trains, flashes of neon and skyscrapers. Kyoto, by contrast, is old Japan writ large, its spiritual heart beating to a very different rhythm. This is not to say that Kyoto is stuck in the past – you only have to see the ultra-futuristic Kyoto Station to realise that. But its modernity is less in-your-face than Tokyo. This is a city of some 2,000 temples and shrines, sublime gardens, traditional teahouses, geisha elegance and centuries-old craftsmanship. This is, perhaps, hardly surprising, given Kyoto’s heritage as the imperial capital for more than 1,000 years; plus the fact that the city was spared the wartime bombings that blitzed Tokyo.

With so much to see and take in, a short stay in Kyoto needs to be selectively planned and must-see attractions are carefully chosen in order to make the most of your visit – which is precisely what our itinerary has done for you. High on most people’s unmissable list is the tiered golden temple of Kinkakuji. Built in the 1390s as a retirement villa for Shogun Ashikaga, it features a three-storey pavilion covered in gold leaf with a roof topped by a bronze phoenix. On a clear day, the sight of the pavilion shimmering against a blue sky and its reflection captured in the waters of the surrounding pond will remain burned in the memory. Incidentally, the actual building you see today is a faithful (and expensive) reconstruction of the original which was burned to the ground in 1950 by a disturbed student monk.

Another iconic attraction is the Fushimi Inari shrine complex, a world of its own with five shrines spread across a thickly wooded mountain. A pathway wanders a couple of miles up the mountain past dozens of sub-shrines and endless arcades of vermilion shrine gates – one of the most impressive sights in all of Kyoto. 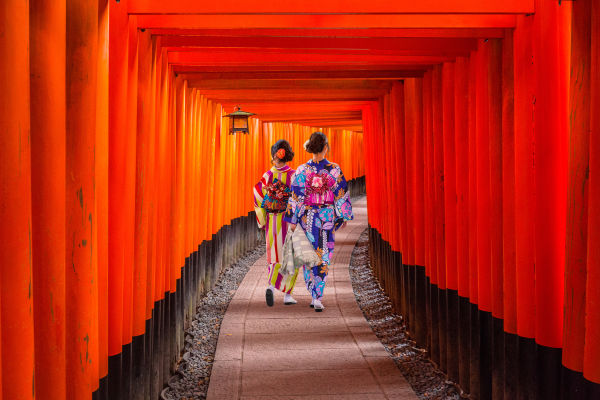 Occupying an exalted spot on Mount Otowa and famous for the grand views from the main hall is the Kiyomizudera temple. Constructed in 1633, the hall juts out over a cliff, with a large wooden veranda supported by 139 pillars, each nearly 50 ft high. Just below the hall is the waterfall Otowa-no-taki, where visitors drink sacred waters believed to bestow a long and healthy life.

Ninomaru Palace and its extensive gardens

Dominating a large part of northwest Kyoto is the mightily impressive Nijo Castle (Nijo-jo), built in 6013 by the first of the Tokugawa shogun warlords Ieyasu. Unlike Japan’s other remaining castles, this is more than just a fortress. Behind the stone walls and ramparts is the superb Ninomaru Palace surrounded by beautiful gardens. Its ostentation was a deliberate demonstration of prestige and power. One of its most intriguing features is the ‘nightingale floors’, special floorboards which creaked when stepped upon – an interesting security measure! Outside the castle, the extensive garden is also a must-see feature in its own right.

A visit to Gion to complete your trip

Finally, no visit to Kyoto would be complete without a stroll through the famous entertainment and geisha quarter of Gion. Wander around a network of atmospheric, narrow cobbled lanes lined with well-preserved wooden buildings, many of which are discreet tea-houses or high-end ryotei restaurants, while keeping an eye out for a glimpse of a white-faced geisha.