Miyajima is an exquisite island in the Seto Inland Sea. Its proximity to Hiroshima makes it a popular antidote for visitors anguished by their exposure to the grim story of the atomic bomb. With its status as one of the three most scenic spots in Japan, the island is also a supreme attraction in its own right. Its most iconic image can be seen as you approach by boat – the vermilion shrine gate (torii) that appears to float on the water at high tide. Constructed in 1875 out of camphor wood, it is one of the largest torii in Japan, rising over 50ft out of the water. It guards Miyajima’s main attraction, the centuries-old Itsukushima Shrine, designated a World Heritage Site in 1996.

Miyajima has been considered a holy place since time immemorial. In 806 AD, the monk Kobo Daishi ascended the island’s highest peak, Mount Misen, and established the mountain as an ascetic site for the Shingon sect of Buddhism. In 1168 it also became a sacred site of Shinto when Taira no Kyomori, then the most powerful man in Japan, chose the island for his clan’s family shrine and built Itsukushima Shrine.

The shrine is a large, red-lacquered complex of halls and pathways on stilts, like a pier, so constructed to prevent visiting commoners from defiling the island with their footprints. On one side of the shrine is a floating no stage (‘no’ means stylised dance-drama) built in 1680 and still used for performances every year in April as part of the Toka-sai Festival. Incidentally, Itsukushima is actually the island’s proper name; Miyajima is just a popular nickname meaning “Shrine Island”. 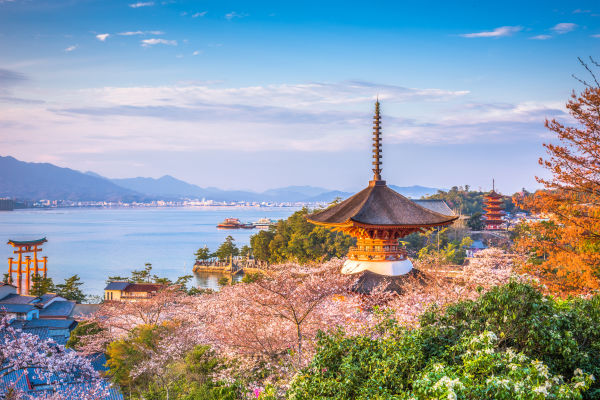 Many people, especially Japanese day-trippers or weekenders from the mainland, come to Miyajima for its excellent hiking, especially the ascent of Mount Misen. At around 1,600 ft above sea level, the summit offers gorgeous views of the whole island and surrounding deep blue waters. The hike can take an hour or two depending on rest stops along the way and your level of fitness, but the reward is well worth the effort.

At the foot of the mountain, and worth a look on your way up or down is, Daisho-in, a Shingon Buddhist temple easily missed by many visitors. It’s full of interesting and quirky things, from Buddhist images and prayer wheels to bird-like demons (tengu) and the Henjokutsu Cave, a fascinating and eerie collection of images from each of the 88 Shikoku pilgrimage temples.

One word of advice when visiting Miyajima: keep a close eye on your belongings. Don’t worry, we’re not suggesting the island has a crime problem. We’re talking about its most famous residents, the free-roaming miniature deer who wander happily amongst the tourists and will nose into your bags or pockets without an invitation!