Tokyo is a megalopolis of dizzying contradictions; high-octane adrenaline rush into a neon-bright future. It has statement skyscrapers, packed trains, futuristic architecture and cutting-edge technology. But it also has ancient shrines, plant-covered wooden houses, cycling grannies, old-school sweet shops, and village-like lanes. Obsessed with fashions, fads, gadgets and gizmos, the world’s largest city is also proud and protective of its heritage and rooted in its traditions. And even though it’s home to over 13 million people, those packed trains run on time, the streets are unbelievably clean and street-crime is virtually non-existent. In short, it works.

Just some of Tokyo's must-see highlights...

So, to get a true perspective on Tokyo in a brief stay, your visit really needs to encompass both the ancient and the modern. A good place to start for many is the relatively uncrowded Imperial Palace, the site of the original Edo-jo, the Tokugawa Shogun’s castle. Here was once the largest fortress in the world, with a five-storey central keep, a double moat, a network of canals, and labyrinthine lanes designed to snare unwelcome intruders. Little remains today apart from the moat and stone walls, though the East Garden is worth a visit in itself. 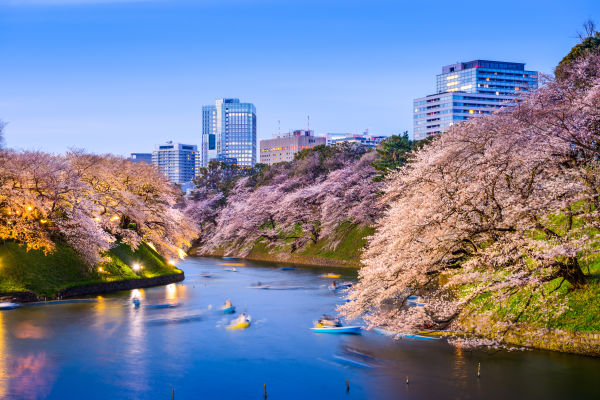 High on the sightseeing agenda, in Tokyo’s Edo-influenced northeast quarter of Asakusa, is the city’s oldest Buddhist temple Senso-ji. Here is enshrined a golden image of Kannon, the Goddess of Mercy, which according to legend was pulled out of the Sumida-gawa by two fishermen in 628 AD. Whether or not the image actually exists or not is a mystery, as it is never on public display! Never mind, because the entrance alone, via the dramatic red Thunder Gate (Kaminari-mon) is worth the fee. A colourful market (Nakamise-dori) selling Japanese crafts paves the way to the spiraling pagodas and altars where incense is burned, hands are clapped, bells are rung and fortunes are read.

Opportunities to shop until you drop

In Tokyo then, spiritualism is alive and well; but so too is materialism. They seem to co-exist quite happily. With its insatiable appetite for trends, Tokyo screams consumerism. Shopping appears to be the number one pastime, and we’d need a separate chapter to describe it in detail. Some highlights include the Harajuku district, especially the pedestrianised street Takeshita Dori – a kind of throwback to the King’s Road and Carnaby Street of 60s London, where rainbow-bright, crazily dressed teenage tribes strut their stuff in trend-triggering fashions. Then there’s Akihabara, aka “Electric Town”, the epicentre of all things electronic and the weird and wonderful anime scene. For chic, high-end brands, art galleries and dining, head for glitzy Ginza, or its fast-emerging rival Marunouchi.

When you’ve reached retail saturation point, retreat to the wooded grounds of Meiji-jingu, the city’s most venerable and peaceful Shinto shrine. It’s just a stone’s throw from the noise and bustle of Harajuku (typically Tokyo), with a wide path lined with thick green forests leading to the serene and spacious classic shrine that’s devoted to the late Emperor Meiji and his wife.

The unmissable and eye-catching 'Skytree'

It’s impossible to see all of Tokyo in two or three days, and it’s never a good idea to try and squeeze too much into a short time. However, one landmark that is quite literally impossible to miss is - Tokyo Skytree. The world’s tallest free-standing broadcast tower looms over the city’s skyline. More than 2000 ft tall, the tower has become a major tourist attraction since opening in 2012, with shops, restaurants, cherry-tree lined plazas and spectacular viewing platforms.