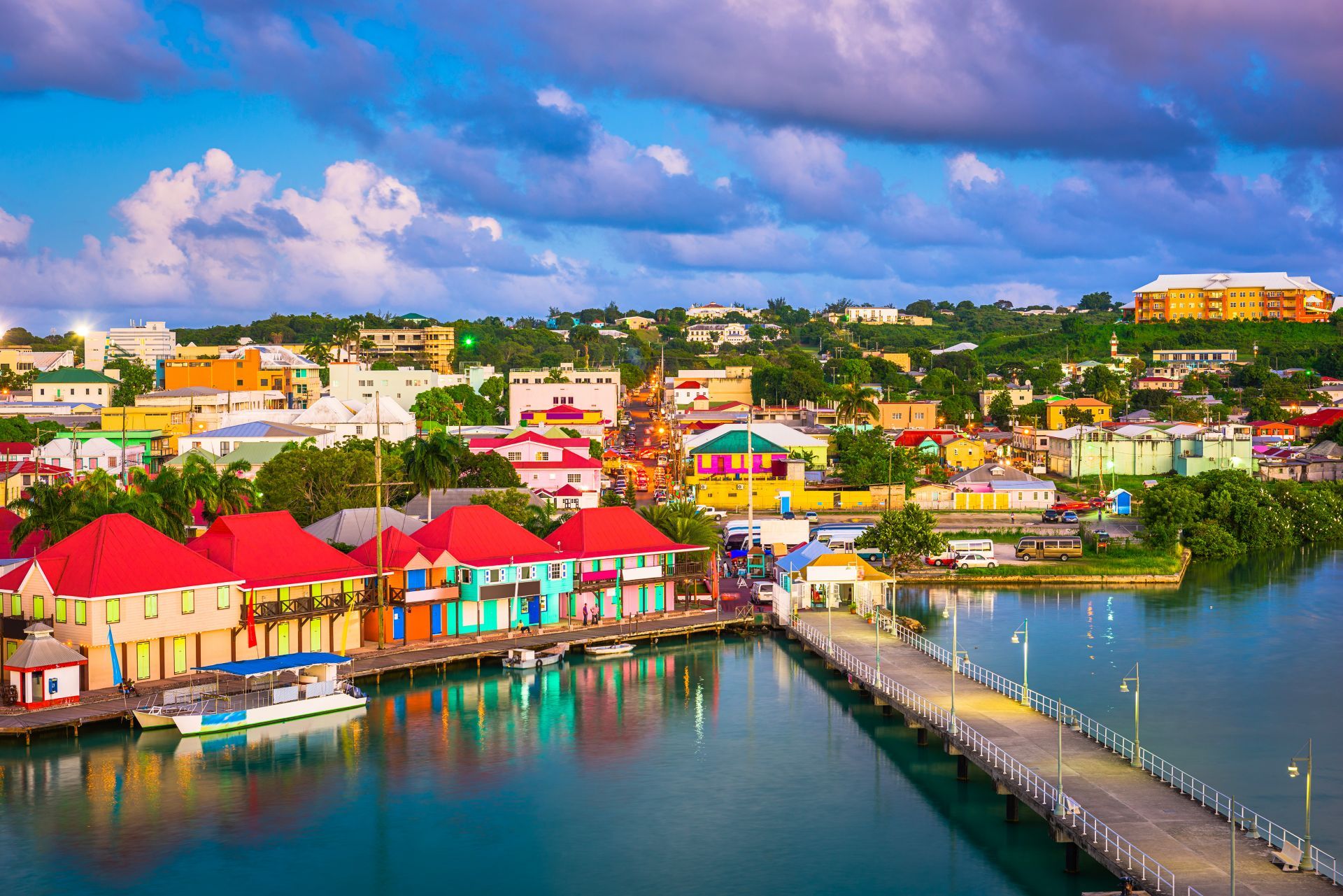 Antigua’s capital, St John’s, located in the West Indies of the Caribbean Sea, is the largest city within Antigua and Barbuda and is also the commercial centre. It offers a variety of shops, cafes and restaurants, as well as a dash of the local-life through its energetic market and even a spot of colonial history.

Antigua is situated very close to the equator, which means the climate is among the most consistent in the world. Average temperatures of 26°C in the peak of summer fall to a hardly noticeable change of 23°C in the ‘coldest’ month, January. But though the temperatures remain reliable, you need to factor in hurricane season, which arrives in the summer and autumn, so heavier rainfall is to be expected at these times.

The candy-coloured market stalls provide St John’s with a kaleidoscopic treat for visitors. As you would expect in this part of the world, there are many an exotic delicacy to feast your eyes, and your taste buds, upon, including sugar apples and black pineapples. This vibrant market gets particularly lively on Fridays and Saturdays, when the stalls spill onto surrounding streets. There is also the modest Museum of Antigua & Barbuda catalogues the history of the island and the small stronghold Fort James is a remnant from the time when St John’s was a strategic naval fort.

The nearby beach is Galley Bay beach, a stunning strip of golden sands, though the water can tend to get rough, making it less-than-ideal for swimming. For a setting that is taken straight from the postcards, the half-day trip to Runaway Beach will make you wish the half-day stretched to half-week.

For coastal vistas and great selections of local Caribbean food, The Cove Restaurant is hard to beat. Or fantastic Italian is yours for the taking at the very highly recommended Stella Ristorante. For a taste of the local that has a bit more kick to it, Papa Zouk Fish ‘N’ Rum offers, as you would expect, a mostly seafood menu, but the real pull here is the selection of 250+ varieties of rum.

A selection of worldwide wines is on offer at C&C Wine Bar, which is found downtown at Redcliffe Quay. North-west of St John’s, overlooking the Fort James beach, the wooden bar Beach Limerz has a great combination of laid-back Caribbean tunes and wonderful scenery.

Carnival season arrives in August, when you’ll be able to witness traditional street food, elaborate costumes and an all-round feel for the real Antigua. The aforementioned Museum of Antigua & Barbuda and Fort James hark back to the history of the city, but you could also throw in Nelson's Dockyard and the English Harbour, for good measure.

Shirley Heights provides those who’ve headed up with breath-taking views of the island’s plush coast. To see it all up-close-and-personal, the island safaris in 4x4s are as exhilarating as you’d expect.

If you have a sports fan in your group, they may be interested to know that the cricket stadium of Antigua is just outside St Johns, named after the island’s most famous player, Sir Viv Richards.

There are options to rent bikes and cars, and the multiple taxi services should mean you never struggle to find one. If you’re on a budget, the local bus service is a cheaper option and but reliability can be issue.